Gold Country Sister Tina here. I am going to share with you my all-consuming love of vintage Glow-in-the-Dark Christmas decorations. Mostly ornaments, although I have other items. This love began back in the 1950's when I was very young. On our tree we had glowing plastic icicles, stars and snowflakes. They were blue, blue/green, and ivory in color. Those little ornaments were very inexpensive and came in a box altogether with a large star meant to go on the top of the tree. I didn't get a picture of the box they came in although I have several of the boxes. There were several of each color and style in the box. We also had little ivory colored plastic cupids, about an inch tall. 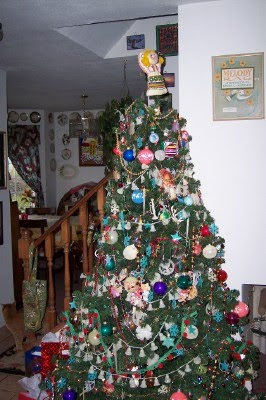 This is one of my Christmas trees with mostly glow-in-the-dark ornaments, and a few others. On top is an angel I embroidered many years ago. She doesn't glow. 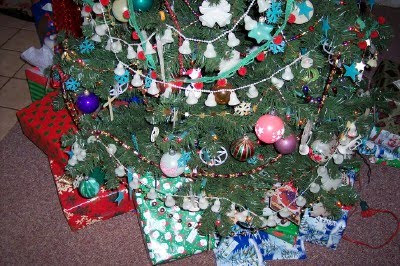 This is a closeup of the bottom of the tree. I wish this was this year's tree, that would mean I was all done with my wrapping! 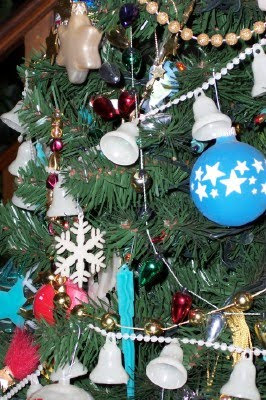 This photo shows one of the plastic icicles and a snowflake. Also shown is a garland with bells. I have several of these garlands which I have collected over the years. They are a good way to finish off the tree. The blue shiny brite ornament with stars also glows. I will show more of these later. 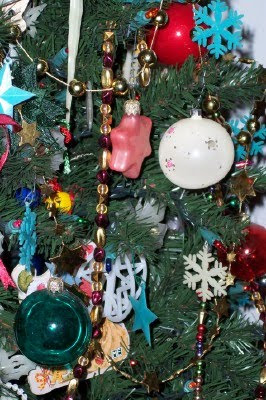 This photo shows part of a blue plastic star on the left. Also in the middle toward the bottom is a 3-D ornament which you make by putting together two circles that intersect and become a ball. The round white ornament at top right glows and is similar to the Shiny Brites but made by a different company. I only have a few of those. 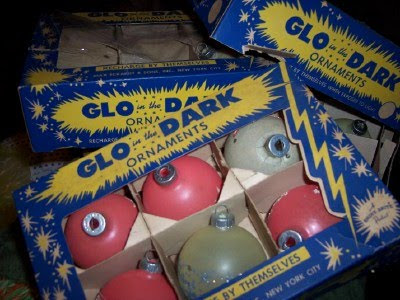 This is a batch of Shiny Brite Glo-in-the-dark ornaments in their boxes. They have several colors including white, yellow, red and blue. The designs on them, which are flocked, include Shooting Stars, Silent Night, Stars, Holly and Bells, and Churches. 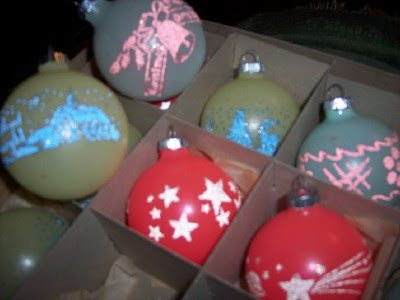 Another closeup of some Shiny Brite ornaments. The flash picked up the designs so you can get an idea of how they glow. 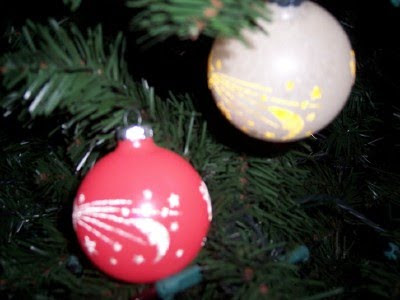 These ornaments show my favorite design, a shooting star, cosmic design. I love anything with the moon and stars on it, but that's another story.
The Glow-In-The-Dark ornaments come in many designs and colors, and are made of plastic and glass mostly. I have little miniature angels in blue and pink with glitter on their skirts and wings; little plastic cupids; pieces from a nativity scene with Mary, Joseph, Baby Jesus, shepherds; lots of different styles of icicles, stars, bells (3-D and flat); fairly large ivory plastic ornaments with different designs such as holly and bells; angels; reindeer; candy canes; I could go on and on. I have been collecting these vintage ornaments for probably at least 25 years, and am always discovering new ones. The most common is the icicle ornament, and those come in all shapes and sizes, the colors are mostly white, ivory, blue, green and pink. Some have hooks on the top for hanging and some have a hole to put the hanger into.
Other items I have for the tree are the various garlands and a glow in the dark star tree-topper. 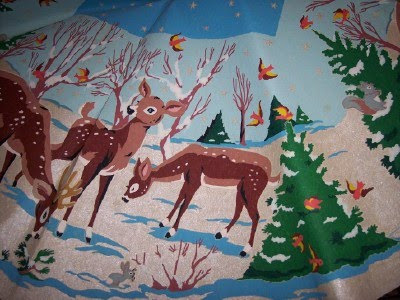 This is a Glow-In-The-Dark tree skirt. The white portions, including the snow and the deer's eyes glow. I just got it this year. I love it. It is made of felt and is in great condition for its age. 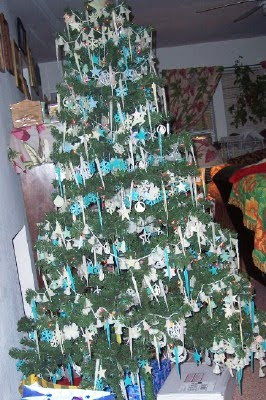 This photo of my tree was from a year that I just put on plastic ornaments. 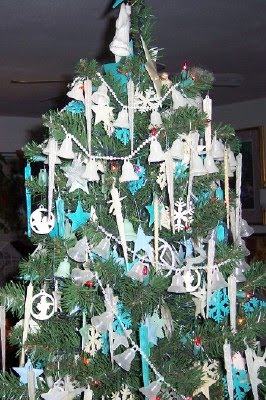 On top of the 'plastic glow' tree I have an angel also made of plastic that glows. I like the look of the blue and white against the green. 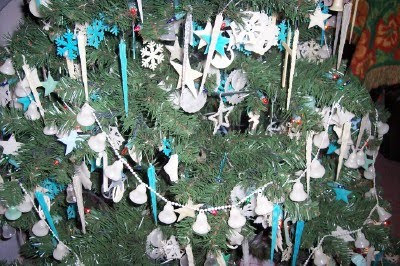 Another closer look at my 'plastic' only tree. Center right there is a little cupid on its own in the midst of green. They are the smallest of all the ornaments. 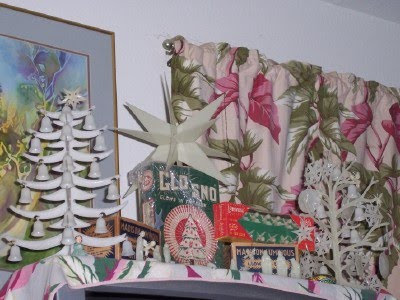 This photo shows some of my other glow in the dark items, including a 3-D star (I have many of these) nativity scenes, trees, a box of cupids, and Glo Sno. 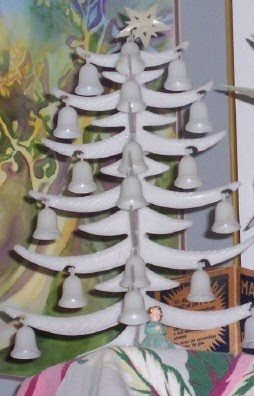 This is one of my Glow in the Dark trees. I decorated it with glowing bells. 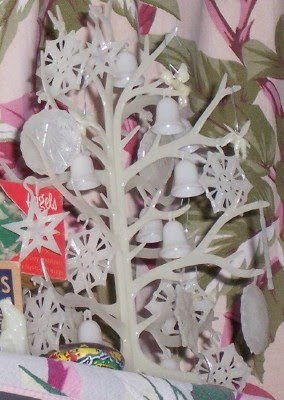 This is my other tree, which was decorated with mostly snowflakes and some bells and stars. 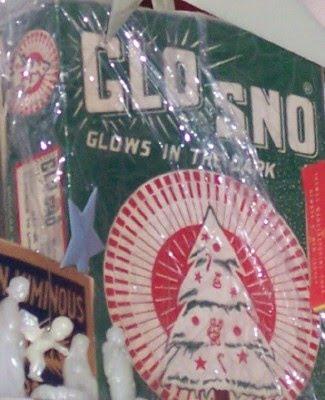 This shows some of the nativity scene (with one of my cupids) and a close up of the box of Glo Sno. I would like to use it but it would have to be a one time thing so it has to stay in the box. 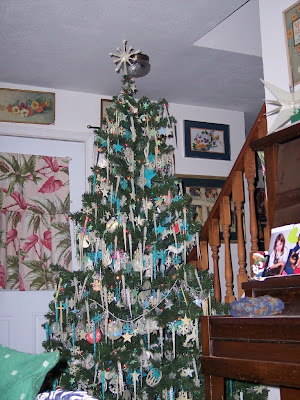 This tree shows a glow-in-the-dark star on top. It took me years to find it!
The best part of a Glow-in-the-Dark tree is at the end of a winter evening. Turn off all the lights and sit in the dark. Slowly everything starts glowing, some brighter than others. Wait patiently and let your eyes get used to the dark and you will be rewarded with the most wonderful magical glowing tree. Settle in and enjoy the tree and the 3-D stars hanging in each window, the nativity scenes, little trees, everything on display in the room. I wish I could share the experience with you. Merry Christmas!
Posted by Tina Dawn at 6:15 AM

Labels: Collections, Holidays, Inside Our Home

I have yet to experience the "afterglow" of your beautiful glow-in-the-dark Christmas in all it's "glowry"- but some day I will - and I can't tell you how much I look forward to it! Fantastic post , Tina- and a FABULOUS collection!!

How fun! I love the tree skirt and little glowy tree!

I LOVE GLOW IN THE DARK!!!! what a great collection and love all the photos! i am envious lori.....

How neat! I adore vintage Christmas ornaments, especially Shiny Brites and I had NO idea they made glow in the dark balls! Now I'll be on the lookout. I love that tree skirt too. Great post!

I never heard of glow-in-the-dark ornaments either. There's even a tree skirt! Who knew!

Awesome! Where have I been? I've never heard of glow in the dark Christmas ornaments! I'm going to have to be on the look out! Merry Christmas! Twyla

I love your Glow-In-The-Dark tree skirt and other glow in the dark items. Can you please tell me where you found them? Thanks.

Wow I have been looking for one of the plastic Christmas tree for years. My grandmother had one and they bring back such happy memories for me. I stumbled across your blog on a recent computer search.

If anyone, including the gold country girls, could tell me where to purchase one e-mail me
at richlweidner@gmail.com

You had mentioned that that white ball shaped ornament that glows like the shiny brite Is from a different company. Do you know what company it is from? It looks like it might be German. 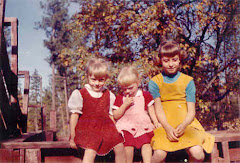 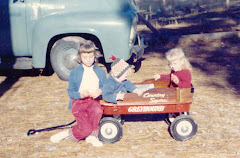 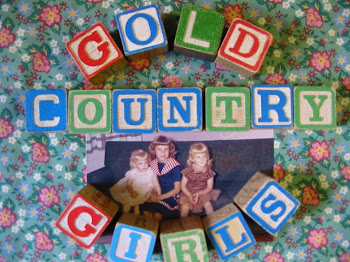 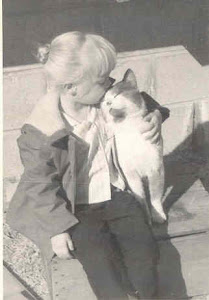